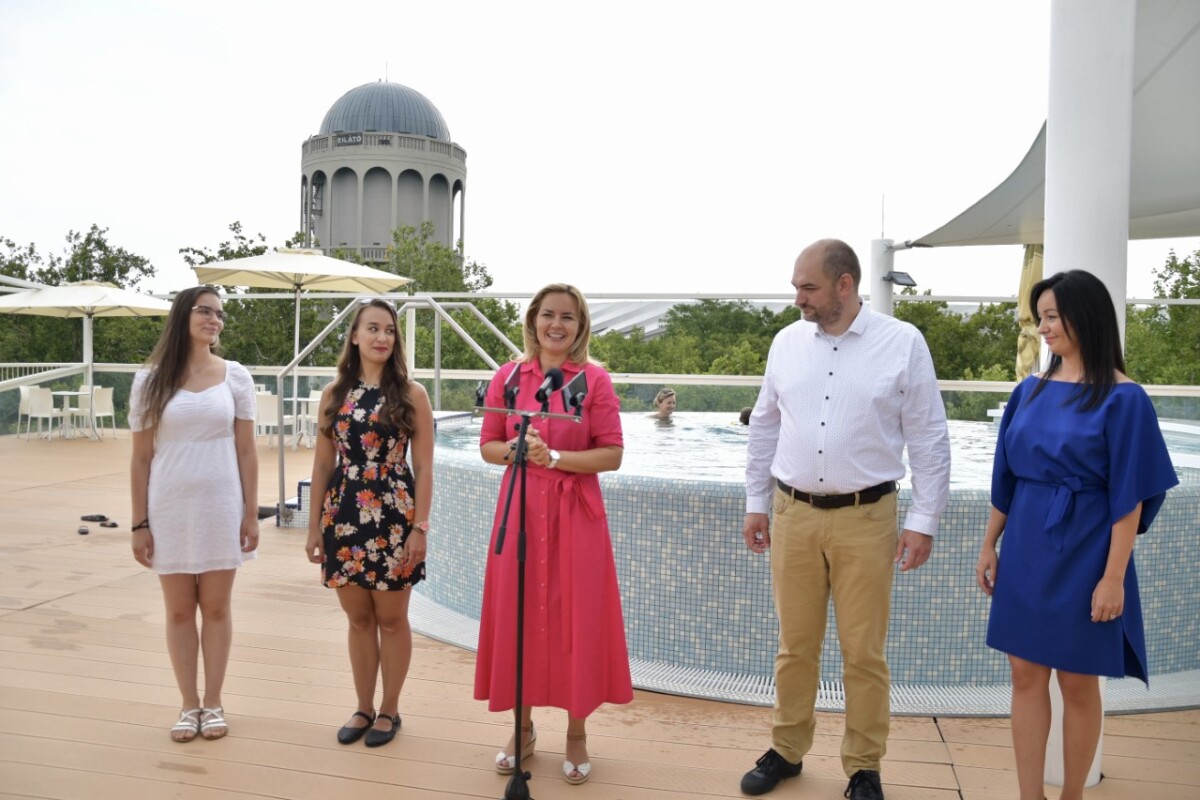 Aquaticum Debrecen Strand has announced an idea contest for high school students to implement a leisure program they have imagined in the beach area. Diána Széles, deputy mayor of Debrecen, and Dániel Kovács, marketing director of Aquaticum Debrecen Kft., reported on the results of the tender at a press conference on July 29, 2022.

As Diána Széles said, the main goal of the competition was to draw the attention of high school students to careers related to tourism, primarily event organization. We are looking for those young talents who love their country and their city and want to do something for them, who can later provide the supply of professionals in this area. According to the deputy mayor, the tender was very successful, the winners of which are the hopes of the future, who can be counted on in this area. For August 24, they are preparing a modern, youthful, musical beach program, which many people are expected to be interested in. In addition to the location, Aquaticum Debrecen Strand also provides the professional background for this.

According to Dániel Kovács, the marketing director of Aquaticum Debrecen Kft., it was possible to persuade high school students to apply even during the summer holidays, because many excellent ideas were received, for example, all-day programs on Greek or Hawaiian themes. There was a candidate who also put together the website of the imagined event. The competition has therefore reached its goal, and together with the winners, based on their ideas, Aquaticum Debrecen Strand will organize a wonderful event on August 24. Dániel Kovács expressed his hope that, with the support of the local government, a tradition could be created out of this, and that this tender could be announced again next year, in order to discover new talents for this beautiful but not simple profession.

Réka Bordás, one of the members of the winning team – who are Medgyessy high school students, Réka Bordás, Zsófia Kiss, and Regina Sitku – said at the press conference: that they are grateful that they can be part of the organization of a real event through the competition, as they would like to continue to do so in the future. . They also applied for this tender because they want to gain as much experience as possible in the field of event organization. The title of their application: Beach on the waves of music! – i.e. let’s jump headfirst into musical styles together. As part of the event, water games, a playhouse, a salsa dance class, and a talent show will be connected to various musical styles. Regina Sitku, another member of the winning team, already spoke about the latter. The talent search was invented for up-and-coming bands and singers, who can enter with their own or other artists’ productions lasting one and a half to three minutes. The productions will be judged by a professional jury. The day will end with a concert by the STK x DCK formation, and its members will also talk about their own successes, thus giving inspiration to their contemporaries to realize their dreams.