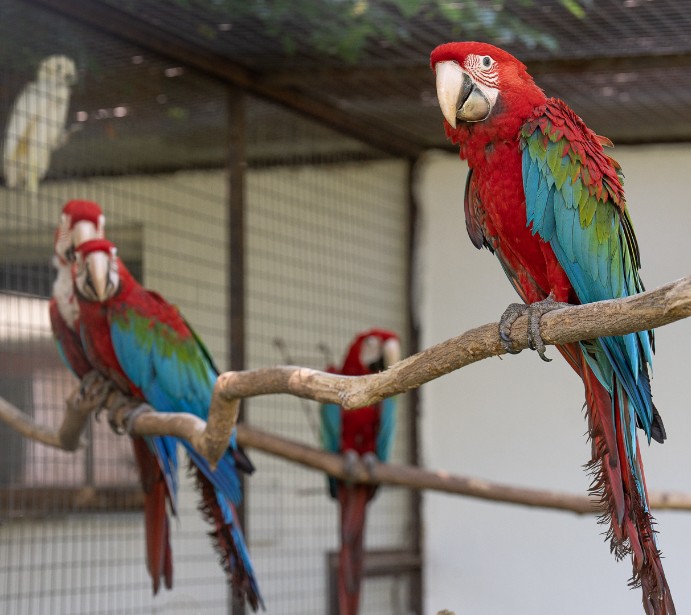 After last year’s increase, the zoo in Debrecen can once again provide good news about the colorful and charismatic macaws, after two green-winged chicks have been added to the stock, which has increased since 2017 by a total of 16 individuals from eight nests. The newest arrivals have recently flown out of the safe den where their parents have been raising them for the past three months. Their gender will only be determined later, but their health and appetite are impeccable. They become completely independent after at least a month and a half, but they can already be seen in the company of their parents on the parrot line. The institution wants to involve the general public in choosing its name, so it is waiting for suggestions on its social media page.

The green-winged macaw (Ara chloroptera), native to the lowland and lower mountain forests of South America, is the second-largest parrot species in the world with a wingspan of up to 125 cm. In addition to fruits and berries, its diet emphasizes nuts, which are also essential for human care. She stays with her mate for life, although she typically does not spend every year; it builds its nest in the hollow of palm trees or in a rock crevice. It is an extremely intelligent and easy-to-teach bird, which visitors can experience up close at the Debrecen Zoo by meeting and taking photos with the gentle macaws, Chili, and Pipi, which they have the opportunity to do every day during the high season from 11:00 a.m. to 2:00 p.m.

In addition to habitat loss, the species is also threatened by illegal catches for commercial purposes, so it is listed on the Red List of the World Conservation Union (IUCN) and II of the Washington Convention (CITES) in its annex.